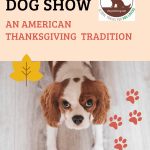 Thankful for The National Dog Show … but mostly for dogs

While in it’s 19th year of broadcast, The National Dog Show shares a similar – forgive me – pedigreed with NYC’s annual Westminster Kennel Club Dog Show at Madison Square Gardens. Hosted by the Kennel Club of Philadelphia, the actual dog competition dates to 1879, but it wasn’t televised until an NBC executive pitched the idea to the network after a Best in Show inspirational moment.