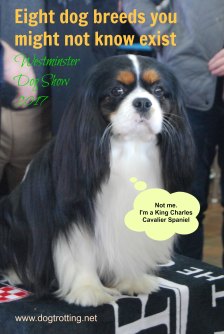 The AKC Meet and Compete Event February 11, 2017 took place on Saturday before the big two-night judging event on Monday and Tuesday when we discover who’s Best in Show and the internet fills will excited announcements. (Social Media loves dog news).

The AKC Meet and Compete, held at Pier 92/94 along NYC’s Hudson River, is the public event most people – or at least those living in New York City – get to see firsthand. It’s the part not televised, and it’s the part showcasing American Kennel Club recognized breeds, many you might not have heard of.

Or at least I hadn’t. 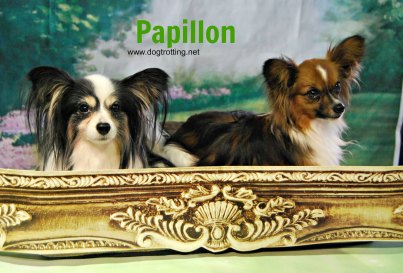 Originally from Spain, this toy breed has winged ears like an accessory on an Academy Awards gown. These are single-coated high-energy dogs that can’t be all white or have no white to be in the judging show ring.

Fun Fact: A Papillon appears in a family portrait of King Louis XIV. 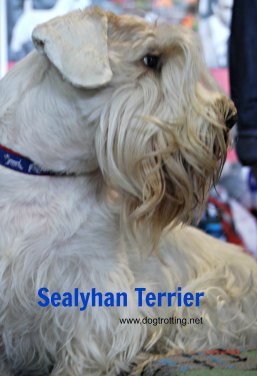 Originally from Wales and bred as a hunting dog that became popular after WWI thanks to Hollywood and the British Royal Family. The breed then dropped to vulnerable low numbers in 2008 and is still fairly uncommon.

Fun Fact: One of Alfred Hitchcock’s Sealhyham terriers appeared in the 1941 film Suspicion.

Thanks to stand up ears, the Norwich is a really cute and cuddly terrier originally bred on UK farms to catch vermin. Today, this is a playful companion animal that will still keep your home free from mice.

Not to be confused with ….

Very similar to the Norwich Terrier, the Norfolk descends from similar terrier pedigreed. However, the Norfolk has dropped ears and became a separate registered breed in 1964 in England. According to breeders, its temperment is alert, fearless and loyal .

Fun Fact: Some believe the drop ear was developed to protect the ear canal from dirt when the dogs dug for rodents.

The Otterhound  is an ancient UK breed dating back to the 1100’s. According to breeders, a strong voice makes the Otterhound good watch dogs but a friendly nature makes them poor guard dogs.

Fun Fact: With only 800 Otterhounds left in the world, this dog is more rare than the Giant Panda. 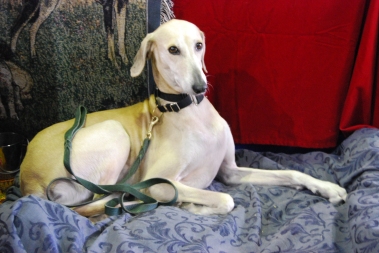 The Egyptian Saluki has been valued by Egyptian nobility and was bred as carefully as Arabian horses. This breed is so ancient, its origins can not be traced but it’s been associated with the Middle East since Antiquity.

Fun Fact: Saluki images have been found in tomb paintings.

The wiry coated Italian Spinone was originally bred as a hunting dog and dates back to 500 BC. It has webbed paws making it a great swimmer.

Fun Fact: They move at a reduced trot, making them good jogging partners but slobber a lot thanks to long beards and lip folds.

Originally from France, this herding dog is still a rare breed. It became a registered AKC breed in 2015 and the dog’s responsive nature and intelligence is making it a popular agility trials participant.

Fun Fact: Four Picards played the leading role in the 2005 film Because of Winn-Dixie, but the breed didn’t gain in popularity because many viewers assumed the starring dog was a mutt.

I met Christina at this year’s Dog Writer’s Association Awards and learned all about Chester. Check him out on ChesterGigolo.com (I’m in the middle of the photo. Christine in on my right, third from the left. Writer and award winner Lisa Begin-Kruysman is on my left. I’m in good company.)

(I’ll be entering the Dog Writers Association of America Awards next year, promise!)

(There are affiliate links in this post, which means if you click on them dogtrotting.net receives a few cents at no cost to you. Thanks for your support!)